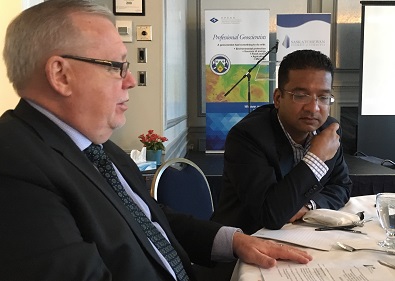 Mineral production topped $6.4 billion in Saskatchewan last year, despite a downturn in both the potash and uranium markets.

It is still one of the biggest employers in the province, and it employs the highest percentage of Indigenous people. To celebrate its success and to look to its future, this week has been declared Saskatchewan Mining Week.

The event kicked off this morning at a breakfast meeting in Regina, where a senior manager in strategy and operations with Deloitte told the audience that change is coming, and the companies that adapt are the ones that will survive.

Sunil Kansal says most mining companies employ dozens of people in maintenance, and no one is looking at the mines’ energy consumption, which eats up a third of the operating budget.

“You will find less than one person, or no person in a mining sector, or in operations taking care of their energy,” he said. “So to me it’s like, why is no one looking at it?”

Kansal also talked about the importance of working with Indigenous people and having them get involved projects from the ground up.

The CEO of the Saskatchewan Chamber of Commerce, Steve McLellan, says that is something the mining companies pride themselves in.

“The reality of it is, when I have asked them the question specifically, would you still have that commitment if it wasn’t required in the lease? They are absolutely crystal clear, no question, because it helps with their productivity,” he said.

The theme of this week’s mining week is “Transformational Change.”

The wind-up event will be the mine rescue challenge, which will take place in Saskatoon on Saturday.