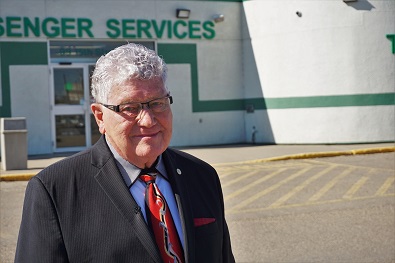 From Saskatchewan Transportation Company’s creator Tommy Douglas to Premier Brad Wall, Don Cody can handily list off the premiers that have had a hand in the provincial bus service throughout its 71-year existence.

Cody, a current Prince Albert city councillor, is a former minister responsible for STC and was also mayor when the bus depot was built in Prince Albert in the mid-90s.

Now, he’s watching as the province plans to liquidate all of STC’s assets to be sold off. The Sask. Party has stated STC had been set to cost taxpayers about $85 million over five years if its operations were to continue, but Cody says he does not agree with the party line from Minister Joe Hargrave and Premier Wall that the closure is about saving money.

“I don’t think it’s really got to do with the money, I think it’s a philosophical thing and I just don’t subscribe to that. I subscribe more to the fact that we should be doing things for people rather than taking away from people. This is going to be very devastating for northern Saskatchewan, and it’s going to be devastating for many communities, but particularly the north,” Cody said.

He made his comments in front of the STC depot in Prince Albert on Tuesday morning, only two days before the buses are set to stop carrying passengers under the STC banner. The view from inside one of STCs last trips. Photo by Chelsea Laskowski.

In Cody’s view, successive politicians of all stripes – even in the notorious Grant Devine era, a premier “who sold almost everything we have” – have seen value in STC’s presence in rural Saskatchewan.

Cody points out that every city in the province is willing to subsidize its transportation systems, Prince Albert included.

“These transit systems are never there for a profit, they’re always there for a service and service is expensive. And as a result they’re never going to be profitable. But what do we pay taxes for? We pay taxes for service,” he said.

Not only will STC customers be losing a service, but 220 union employees will be losing their jobs, and Cody said government moves like this as well as the privatization of laundry services and prison food services in recent years have hit Prince Albert particularly hard.

As a city councillor now, Cody said the province has made it clear there’s no turning back on STC’s wind-down.

“You do feel a bit helpless, you know, you really do. Because you’d like to help, you’d like to do something,” Cody said, “but there’s very little that a city can do by way of helping out.”

There is some optimism that private businesses are interested in buying STC’s assets and filling some of the gaps in service left behind, but it’s not yet known how long the STC liquidation process will take.

For more information on what STC’s closure means for passengers, follow this link.