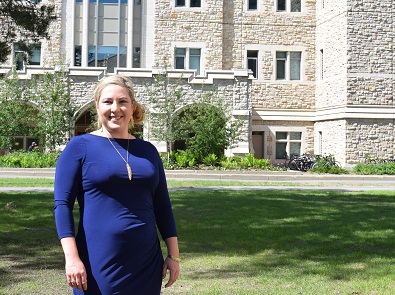 Fauna Kingdon is one of three Indspire Youth Laureates partaking in a Cross-Canada tour to showcase the Indspire program. Photo by Joel Willick.

A group of successful Aboriginal post-graduate students are hoping their stories of success will motivate other Indigenous youths.

Three Youth Laureates of the Indigenous-led Indspire program are currently on a Cross Canada tour to promote Indigenous education. Indspire is a national charity that aims to provide scholarships and bursaries for Indigenous students.

The third stop on the seven-city tour brought the three Laureates to the University of Saskatchewan on Tuesday afternoon, where they lead a panel discussion. They spoke on their childhood, the challenges they faced in their education and where their education has brought them today.

“There is hope for support, for education funding, for people who have come from different circumstances and situations and hopefully we can motivate them to say ‘I can do it,’” says Fauna Kingdon, one of the Laureates.

Kingdon, a Metis woman originally from Iqaluit, has seen firsthand the impacts Indspire can have on an educational career. She was named a Youth Laureate in 2005 and has been supported by the organization throughout her academic pursuits. Kingdon first did her Bachelors of Commerce degree at the University of Manitoba before completing her Master’s in Accounting from the University of Saskatchewan. She now works as the Chief Financial Officer for Fisher River Cree Nation in Manitoba.

“In my specific case I can speak on the challenge of isolation,” said Kingdon. “I want to convey to (the youth) that there is help once you get there and there is a support system and I believe that is one of the main factors in my story that helped me overcome this challenge.

Indspire was one of the charities selected to receive the federal government’s Canada 150 Fund. The Cross-Canada tour is a way to showcase the mission of the organization.