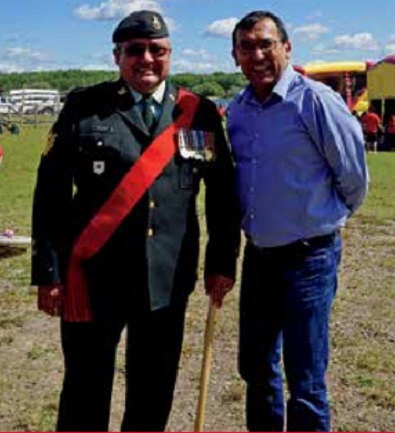 Twenty-one years is a long time to spend in a job, but it’s even a greater accomplishment for someone who has spent that time serving their country in the Armed Forces. That is why Sergeant Robin Dawatsare from the English River First Nation will receive full military honours at a ceremony in Saskatoon this evening.

Sgt. Dawatsare has served in the military for the better part of his adult life. His devotion to the army has taken him places he thought he would never see. Sergeant Dawatsare served two missions to Bosnia and two in Afghanistan.

Along with being posted to the First Battalion of the Princess Patricia’s Canadian Light Infantry in Edmonton, Sergeant Dawatsare also helped train rangers in the high north and served with the North Saskatchewan Regiment in Saskatoon.

His wife Vanessa says he retired last September but didn’t receive any honours for his time served, so she thought it was appropriate that something should be done.

“Officially, the army was supposed to do something right away, but it either was swept under the rug or forgotten about. So I said, no, that’s not happening,” she added. “Twenty-one years, that’s a big achievement.”

She says the ceremony will include awards and presentations on behalf of the Governor-General and the Prime Minister’s Office, and will also include acknowledgments from the Saskatchewan Veterans Association, Desnethé-Missinippi-Churchill River MP Georgina Joilibois and Athabasca MLA Buckley Belanger.

Vanessa Dawatsare says to her husband, it’s not a big thing, but she says he deserves more for his years of service to the Canadian military.

Since retiring, Sergeant Dawatsare has come back home to English River. Vanessa says he missed being home after being posted across Canada and overseas. She says he is happy to be home and now enjoying early retirement.

“He’s proud to be one of the youngest retirees around,” she said laughing.

The ceremony to formally honor Sgt. Dawatsare will take place this evening at 8:00 pm at Sergeant Hugh Cairns V.C. Armory in Saskatoon.