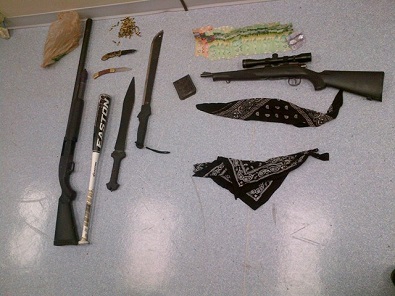 Six people have been charged after reports of gunfire in Meadow Lake early Monday morning.

Mounties say 20-year-old Draysen Bigham was arrested and is facing numerous charges, including careless use of a firearm and possession of cocaine for the purpose of trafficking. He was previously wanted on weapons and robbery warrants.

Others arrested and charged include:

19-year-old Miami Morin for possession of stolen property and failing to comply with probation.

42-year-old Jonathon Dewolfe for possession of property obtained by crime and failing to comply with a judge’s undertaking.

All six people have been remanded in custody until court hearings in Meadow Lake on Thursday.

People are now talking about the recent gun and drug arrests in Meadow Lake, and that may be a good thing according to RCMP Sergeant Ryan How. He says gang and drug problems seem to have gotten worse lately. He says it also has community members looking at ways to get rid of drug houses.

“I think it has opened up a conversation with some residents, saying that there are certain properties in town that are concerning,” he said. “Some good residents are living in fear because there are drug houses in town, and I think it’s a positive thing to bring this to light and to have this conversation. It’s not something new that we’ve been suddenly uncovering.”

Guns, money and drugs were also recovered by the RCMP during the investigation. In total, 82 grams of cocaine was seized, with an estimated street value of approximately $7,200.

RCMP say their investigation continues and police are still searching for other suspects. If the public has any relevant information, they are encouraged to contact the Meadow Lake RCMP.