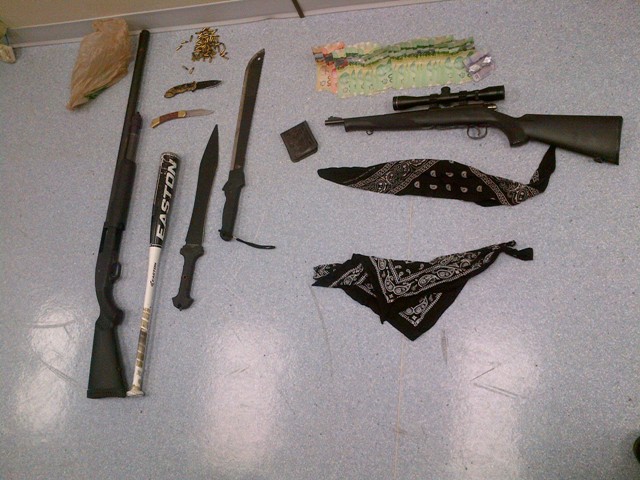 RCMP believe that the recent increase in violence in Meadow Lake is directly attributable to the drug trade and a specific group of people.

This follows reports of gunshots in a Meadow Lake neighbourhood earlier this morning.

No one was hurt, but a number of arrests have been made throughout the day including the recapture of a wanted fugitive, Draysen Bigham.

Mounties believe that all the suspects involved in the shooting this morning are now in custody.  Among them are a 17-year-old and a 42-year-old who face multiple charges.

Drugs and weapons were seized as part of today’s arrests.  A shotgun, .22 calibre rifle that is believed to be stolen and numerous other weapons were seized including swords and bats.  A large quantity of crack and soft cocaine and cash was also recovered.

This event is believed to be related to an event last Friday night where a man driving a Black GMC Sierra 1500 Extended Cab truck with chrome door bumper strips and smoked tail lights passed a semi on Highway 4 south. RCMP say that when the half-tonne passed the semi, the truck cut the semi off and then pointed a handgun at the driver. The truck then turned around and drove back towards Meadow Lake. The driver of the truck is described as approximately 30 years of age, Aboriginal, stocky and wearing dark clothing.

The recent phenomenon of ATVs being driven erratically through Meadow Lake with the driver’s face covered is also believed to be related and the same suspects involved.