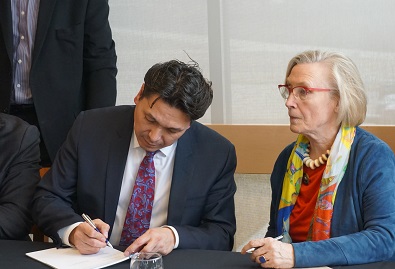 On Thursday, Whitecap Dakota became the 37th First Nation in Canada to sign an agreement-in-principle on self-governance that will eventually bring the Saskatoon-area First Nation out from under the Indian Act.

The signing of an “agreement in principle” between Chief Darcy Bear and Indigenous Affairs Minister Carolyn Bennett at the reserve’s golf course is the second step of a four-step process for the First Nation to gain self-governance.

It’s expected the process, which requires negotiation with the feds and Whitecap leadership as well as ratification by Whitecap’s members, will take until about 2020, Bear said after the special ceremony in which Whapeton drummers played an honour and victory song, and dozens of people heard from Bear, Bennett, and FSIN Chief Bobby Cameron.

The self-governance being referred to covers health, education, justice, and economic activities as well as the way the federal government funds Whitecap.

“The financial relationship is different. It’s about a government-to-government funding structure that is about predictable, stable, adequate funding, almost like a transfer like a province or a territory,” said Minister Bennett.

The aim is to find a new relationship that honours treaties rather than abiding by the Indian Act.

“Paternalism and colonization just has been a total failure, so the more communities the more that can understand what Chief Bear and his council are doing here, the more there’s that help to move out from the Indian Act and to take charge. That’s what we want to do,” she said.

Bear acknowledges his business-savvy reserve has already been able to move forward economically in spite of past stifling rules like the Pass System and Indian agents, thanks in part to land management framework agreements created by chiefs like Austin Bear of Muskoday.

“Prior to European contact we were never lazy people. Our ancestors were always hardworking people. The Indian Act created a cycle of dependency and everybody started to believe that we can’t do anything for ourselves, we had to wait for somebody to come rescue us,” Darcy said.

Whitecap is currently working towards building a hotel and convention centre on reserve.