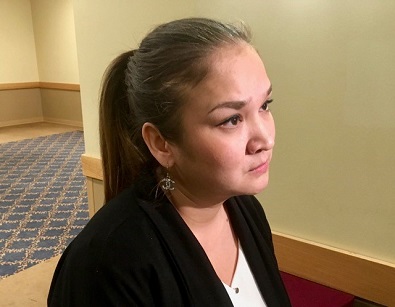 The aunt of a Regina woman who fell to her death down a hotel laundry chute more than two years ago is still not convinced she got into the chute on her own.

Delores Stevenson made the comments after the final witness testified at the inquest into the death of 29-year-old Nadine Machiskinic.

The bulk of the testimony at the inquest came from toxicology experts who were asked to determine if Machiskinic could have got into the small chute on her own considering her level of drug and alcohol intoxication.

There were different and changing opinions. The province’s chief pathologist doubted she could, but an RCMP toxicology expert and Alberta’s chief toxicologist testified she could have.

It was noted that a high level of a common antidepressant known as Zyban could have countered the sedating effects of alcohol, methadone, sleeping pills and an anesthetic that were in her system.

Her aunt doesn’t buy it.

“No, I honestly don’t think this was an accident,” said Delores Stevenson.

The amount of drugs and alcohol in her system would have rendered most people unconscious or caused a fatal overdose.

The case now goes to the jury.