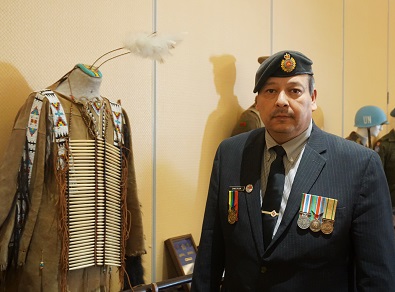 Retired combat engineer Victor Sanderson, of James Smith, is one of those going on the Vimy Ridge trip. Photo by Chelsea Laskowski.

A group of 20 Saskatchewan First Nations veterans and their partners are hopping on a plane early Saturday morning in order to honour ancestors who are buried near Vimy Ridge.

Saskatchewan First Nations Veterans Assocation (SFNV) Grand Chief Steven Ross is among those who will be marking the 100th anniversary of the battle of Vimy Ridge on April 9 during commemorative events at the Canadian National Vimy Memorial in France.

He said they plan to visit the gravesites of First Nations soldiers while they are overseas, and others are planning to bring back soil from the sites to give to the lost soldiers’ families.

“We’ve lost many brave, young men. Some of them were underaged but they went anyway, they got through the system somehow. And then, they never made it back and that’s what hurts,” Ross said.

For veteran Victor Sanderson, it’s important to follow their cultural ways while they honour the fallen.

“When a person dies they go into the spirit world. And sometimes they go there hungry and they come back and they tell somebody in their dreams that they need to be fed,” Sanderson said.

He said they won’t be able to host a feast like they do back home, but the makeshift feast is meant for the fallen “to carry on their journey in the spirit world.”

Ross said fellow SFNVA executive member Phillip Ledoux was key in their fundraising efforts for the trip. Ledoux been through his fair share of wartime trauma, and has a very personal connection to Vimy.

“My uncle was killed in the First World War and that’s one of the graves these guys going to Vimy Ridge are going to visit,” he said.

However, Ledoux won’t be among those boarding the flight to France, because he gave up his seat on the flight to another SNFVA member.

“He’s never been to France, I’ve been there twice. I’ve done a lot of travel overseas so it gives the younger people a chance,” he said.

The group will spend 10 days touring historic World War I and II sites across France and into Belgium.