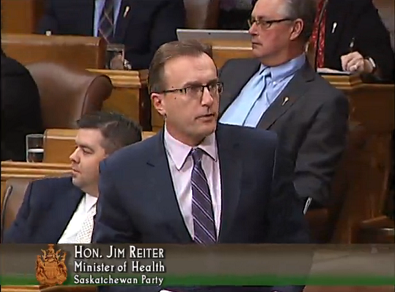 The timeline for the province’s plan to overhaul health regions and healthcare delivery is a little more clear now that new legislation has been introduced to consolidate all health regions under a single Provincial Health Authority.

The new act, called “The Provincial Health Authority Act” was introduced in legislature on Tuesday by Health Minister Jim Reiter. This is the first major step towards implementing the major recommendation of health region consolidation contained in the Saskatchewan Advisory Panel on Health System Structure Report, which was released in January.

The single Provincial Authority is expected to come into force one the new act is proclaimed in the fall.

A provincial news release states the new act “will improve frontline patient care by removing arbitrary health region boundaries” of the current 12 Regional Health Authorities that answer to their own boards and are each led by a CEO.

The new act is meant to replace “The Regional Health Services Act,” and the province says it will “establish the specific roles and responsibilities of the Minister and Provincial Health Authority.”

The new act is also meant to create and continue operating Community Advisory Networks in order to identify community needs and interests.

Not all aspects of the advisory reports’ recommendations will be implemented by the fall. The province says different parts – like the re-design of acute care services, Emergency Medical Services, laboratory and diagnostic imaging – will be phased in over time.

The province has yet to outline the structure of the new authority and the integrated service areas contained within it. The advisory panel’s report recommends the province create four different “service integration areas,” but leaves wiggle room for the province to choose between three and six different areas as needed.

“As a community outside of the bigger centres, we’re already strapped for services. Over the past years we’ve lost services,” she said.

“Having a strong connection to rural Saskatchewan, I know how important health care is to communities across this province,” Ottenbreit said.

“Our government is committed to ensuring that the local voice continues to be heard within the new health system structure.”