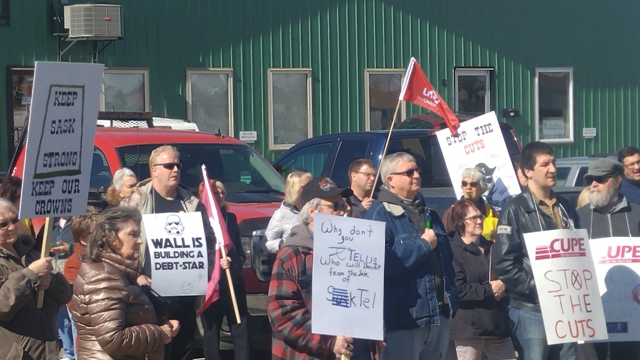 The provincial government’s plan to scrap the Saskatchewan Transportation Company is being met with public protest.

Around 70 concerned citizens and union members from CUPE, the Saskatchewan Federation of Labour and the Service Employees International Union rallied in front of Crown Investments Corporation Minister Joe Hargrave’s Prince Albert constituency office today, urging the government to reverse their decision in regard to STC.  Similar rallies were held in La Ronge and elsewhere.

The Saskatchewan Party government plans to shut down STC at the end of May, cutting service to over 200 communities and eliminating 230 jobs, which it says will save the government over $85 million.

Cumberland MLA Doyle Vermette is the Opposition critic for STC and said the impacts on northern and rural Saskatchewan will be huge.

“There are so many people that it affects,” he said.  “Not only people who rely on the service for parcels or to go and visit family, but also for medical visits and seniors who don’t drive. So many people are calling out that it’s the wrong thing to do.”

Vermette said that residents who are directly affected and even those who aren’t, should be contacting their MLA, regardless of whether they are in government or opposition and ask for this decision to be overturned.  He said the original intent of STC was to serve the people of the province.

Vermette and the Opposition NDP have been gathering signatures from people across the province opposed to the shuttering of STC and plan to present the petition to the minister next week in the Legislature.

He said it will be the petitions and rallies like the one in Prince Albert and others in Saskatoon, La Ronge and Regina that will give the Opposition the backing to demand the provincial bus service not be mothballed.

The loss of the STC service will also have a major impact on the city of Prince Albert, according to councillor Don Cody.

Cody said the city coffers will feel the impact as the city will lose about $2.4 million in revenue from the provincial government.

He said that the city already had its budget in place for the coming year — and with the impending loss of STC service, it may mean a tax increase to local ratepayers or a cut in services.

“We will have to find the money somewhere,” Cody said, adding that municipal governments cant run deficits or debts like the provincial government and that they have to balance their budget.

Cody said that the city doesn’t want to cut services because, according to him, “we have cut enough”.

He said that if the people of the province and municipal governments knew about the plans in regard to slashing STC service six months ago, they would have had time to be organized to deal with it.

“This was dropped on us, at the last hour, after we had our budgets done,” he said. “It’s a devastating move and a blow that one could say is in crisis proportion.”.

Another rally is planned for next week in Moose Jaw.

Hargrave’s office was closed for the afternoon, but the minister did respond to MBC News in regard to the rally.

He said that it was to be expected when the government makes a decision like this.

Hargrave also responded to comments from NDP MLA Doyle Vermette, who said that he had never heard so many complaints from seniors about the shutting down of STC.

He said that when the NDP were in power, “they admitted that STC was unsustainable in it’s present form” which at the time was being subsidized by between $2 and $7 per unit.

Last year, Hargrave said the government was subsidizing the bus company $94 per ride, and with ridership down 35 per cent, it was costing the government almost $17 million per year.

He said that the money the government saves by cutting STC can go into more health, social and education programs.

Hargrave added that he feels for those people affected by the decision, but says there is an opportunity for some non-profit organization or private entrepreneurs to apply to the Highway Traffic Board to pick up some of those routes.