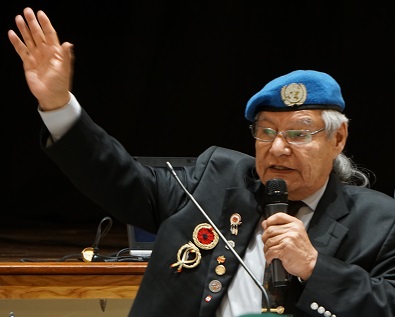 First Nations veterans from across Saskatchewan gathered at the Dakota Dunes Casino on Wednesday.

The Saskatchewan First Nations Veterans Association (SFNVA) assembly attracted about 100 people who heard from the Indigenous advisor to the Commander of the Army.

The association’s Grand Chief Steven Ross said they also heard about a fund to ensure no veteran is denied a dignified burial.

He said membership had not heard about this program before, and the information they received on the Last Post Fund as well as the association’s own Grave Marker Project will be valuable. Ross added this is especially important because the group is getting older each year.

Veteran Victor Sanderson agreed, saying “our association is based on the fallen now, because we only have like maybe one or two World War II veterans left, and Korean as well.”

He said the group has something to offer to young First Nations veterans a well “because this is a place where we can actually feel better about ourselves because we are different from being civilians. And when we get out of the Armed Forces we don’t know who we are, but when we come to an association like this where we all welcome each other it is a family, a military family of veterans.”

The event also provided a sense of kinship for veterans like Phillip Ledoux, who went through traumatic wartime experiences before becoming SFNVA Vice-President.

When asked what an event brings to him, he said “the camaraderie. We’re one big family because we all went through the same thing in one form or another, and the companionship. We call each other bro or sister.”