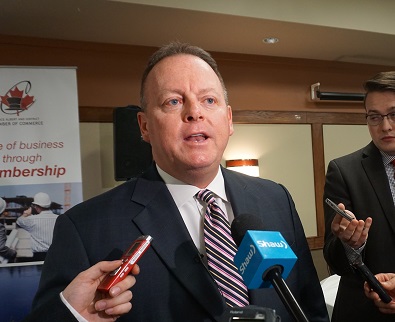 Kevin Doherty has been speaking at Chamber of Commerce events across the province, starting in Regina on Thursday.

In Prince Albert on Friday, he pledged to answer audience questions on what he calls a “tough budget” from a crowd of more than 100 people.

One of the questions came from Grant Gustafson, who runs a group that provides life skills for people with mental health issues called Self Help and Recreation Education (SHARE) and also acts as a trustee with the local school division.

“We are struggling to provide services” with an influx of people moving from places like La Loche to access better education and health services, Gustafson said.

He asked whether the province has budgeted additional federal dollars promised to the province through the Canada Health Transfer towards mental health.

Doherty said the budget does include those dollars, but there are conditions for how they are spent because during past negotiations, “on mental health the Prime Minister was insistent upon, there has to be new programs for mental health with the dollars he was allocating.”

He said mental health in the La Loche area has already received federal and provincial attention and new programming dollars should be flowing there, but health ministers still need to hammer out an agreement for how transfers will look for all of Saskatchewan over the next 10 years.

Afterwards, Gustafson told MBC that SHARE is getting more and more people from northern Saskatchewan in their program.

“Right now, I would love to see the province take some of that federal money, a third of it or more, get into the north,” he said.

“We see that they do not have mental health services across the north like they do in other areas… Deal with mental health, you can have more productive people out there.”

Doherty was also asked about whether the province will make moves to reduce the sting of its decision to increase the PST from five to six per cent.

However, he is firm on the provincial budget’s current plan to spend three years reducing their budget deficit until they’re back in the black. In 2017-18, the province is expected to have a $685 million deficit.

He said the budget is focused on taxing people’s spending, or consumption rather than taxing their income.

There are reductions in the budget. For example, corporate income tax rate is dropping by half a percent.

He defends the choice to cut the province’s bus service, Saskatchewan Transportation Company, saying it was unsustainable no matter what way they looked at it.