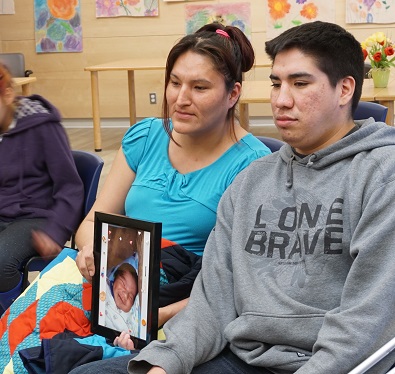 Family members say a Mistawasis baby made a huge impact in his short life.

Melanie Badger’s son Ayden died at only two months old in February of 2016, and the family’s efforts to honour his body with a smudging ceremony at Shellbrook’s Parkland Integrated Health Centre revealed a lack of cultural understanding.

“That’s what we do with our loved ones when they’re gone. We smudge them so we know that their spirit is going to a good place,” said Ayden’s great-aunt Esther Badger, who was with the baby when he was taken to hospital after becoming unresponsive at his Mistawasis home.

Nurses and staff tried to keep them from taking the baby to the cultural room, Esther said, which led to anger and hurt while they were grieving their loss.

The family was eventually able to smudge, and Esther said after apologies were offered there are no remaining hard feelings.

There have been big changes since then: the centre’s cultural room has been renovated and is called “Ayden’s Room” in his honour.

Melanie, who has two other children and is currently pregnant, said she’s proud of Ayden.

“I can’t believe he was with us for only eight weeks and two days, and he accomplished lots. I’m so very proud of him, and with this room opening in his name, I’m still just trying to wrap my head around it. It’s unbelievable,” she said.

On Thursday, the room was blessed with a pipe ceremony and special program at the health centre.

The ceremony came after discussions between the family, Federation of Sovereign Indigenous Nations special investigations unit, Mistawasis leadership, the Saskatoon Tribal Council, and Prince Albert Parkland Health Region to make sure cultural practices are understood and respected in the future.

“Creator knew, because this is creator’s will, knew that this was what was going to come about, that there was going to be an opportunity for healing,” said FSIN Vice-Chief Kim Jonathan.

Health region CEO Cecile Hunt said the changes “ensure we can better meet the spiritual needs of the communities that we serve” because spirituality is part of being well cared for under the healthcare system.

“His feet never touched the ground but he caused a lot of thunder.”

She said she believes there should be a room in all hospitals to accommodate people of any culture as they take part in spiritual practices.