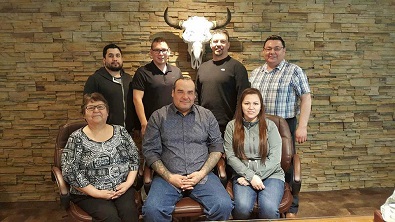 There’s a changing of the guard on Beardy’s & Okemasis First Nation, after former councillor Roy Petit was announced as the Duck Lake area’s new chief on the weekend.

Former chief Rick Gamble was not in the running, and Petit was up against Candace Scott, Brian Seeseequasis, Brian Littlepine, and Remonda Gardipy.

This was the first election where council was reduced from eight to six members.

In order of most votes received to least, band council is made up of Edwin Ananas, Leighanne Gardipy-Bill, Jeremy Seeseequasis, Kevin Seeseequasis, Jackie Gamble and Tyrone Smallchild.

Of those, Jeremy, Kevin, and Gardipy-Bill were re-elected.

The new group of Beardy’s & Okemasis leaders met for the first time on Monday, where they laid out their first priorities in advance of taking on their new roles on April 1.

For Petit – who said he’s not a politician by nature – being chief is not about having power, it’s about communication and teamwork.

“A lot of nations have gotten away from the teamwork. It’s usually, even with business and community, they look at – and to – the chief for all the answers,” he said.

“So I want to create a team and support that team in doing their job in whatever portfolio they take and move forward together, and also including the community in a lot of that. There was a lot of good ideas that came from all the campaigners that were in this election and I want to try to utilize them and some of their ideas.”

Petit said he ran for council a few years ago at the urging of community members, and he ran for chief because “my late mother who passed away in August told me that I needed to run in this election.”

He said the past few days have been very emotional “just thinking of her and knowing that she’d be proud of how far I’ve gotten.”

Meanwhile, it looks like Beardy’s and Okemasis has to do a bit more work to get three proposed band acts approved.

The band held an unsuccessful referendum on the acts during their elections on Friday. Petit said there was support, but they didn’t meet the vote threshold to approve the draft Beardy’s constitution, Executive Act, and Financial Management Act.

Petit said they’re looking to try the referendum again at their next Treaty Day.