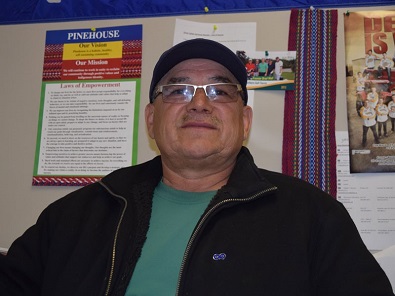 A unique addictions recovery project run by the Village of Pinehouse has expanded, but village officials would like to expand even more.

It used to run only for a couple of months in the summer, but this year, for the first time, it is being utilized year-round.

It is called the Recovery Lake Project, and is located about 19 kilometres south of Pinehouse. It began in 1987, but because of the cold winters, it only operated during the summer for a month or two.

Now, three winterized cabins have been added, allowing the first of nine winter clients to check in.

Glen McCallum is the village’s director of social development. He is also a medicine wheel councillor. He says the traditional approach is proving very successful in treating addiction.

“People say you have to take ownership of your own life, and yes we have,” he said. “It is very hard when policies are very restricted in getting capacity in order to do these programs in our own communities.”

McCallum says Pinehouse used to be known as the drinking capital of the north in the 80’s. He says there is still a problem, but it is much better than it was. He credits that to the success of Recovery Lake and the many volunteers who help run it.

“Oh yeah, people are very enthusiastic about it,” he said. “Every time, Recovery Lake is open — everyone wants to help.”

Right now, about 14 volunteers are helping out delivering food and doing other chores.

McCallum would like to see federal and provincial funding so the centre could expand to accommodate even more people in the north.

Not only is McCallum a Medicine wheel councillor at the treatment facility, he is also a former addict who helped establish the centre with his brother Leonard thirty years ago.