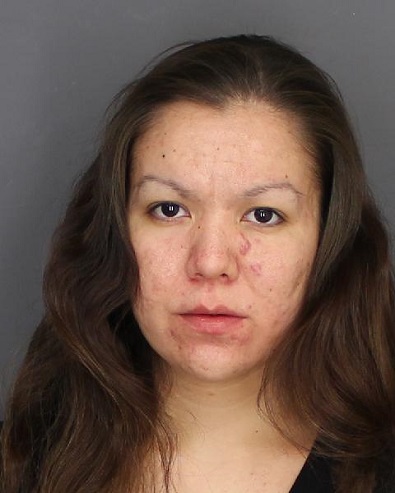 EDITOR’S NOTE: A previous version of this story incorrectly stated where victim Dakota Nayneecassum was from. We regret the error.

Prince Albert police are on the lookout for a woman who failed to turn herself in after losing a manslaughter appeal at the Supreme Court in January.

Tasia Natewayes, 31, had previously been granted interim release while her lawyer prepared to appeal her guilty verdict for being an accessory in the 2012 killing of Ahtahkakoop 18-year-old Dakota Nayneecassum, who had been visiting Prince Albert at the time.

The Supreme Court dismissed Natewayes’ case, and she was supposed to surrender to police.

However, Natewayes has yet to return to custody, which has landed her a spot on Prince Albert Police Service’s Most Wanted list for being unlawfully at large.

She had been serving time at a healing lodge before the approval for interim release, according to her lawyer Peter Abrametz.

At Natewayes’ trial sentencing in 2015, court heard she is a treaty member of the Sandy Bay area and that her family had suffered the intergenerational harms of the Indian Residential School system.

At trial, court heard Natewayes had acted as driver for the five males who committed the fatal break and enter and stabbing the night Nayneecassum died.

Natewayes had originally been found not guilty of being a party to manslaughter and guilty of break and enter with intent to commit an indictable offence, and received a five-year sentence.

On appeal, Natewayes was found guilty of being a party to manslaughter, and her conviction on break and enter was overturned. She received an eight-year sentence, which was upheld by the Supreme Court.

Natewayes is described as 5′ 5″, 135 pounds with brown hair and brown eyes.

Anyone with information on Natewayes’ whereabouts is asked to contact Prince Albert Police at 306-953-4222 or Crimestoppers at 1-800-222-TIPS.