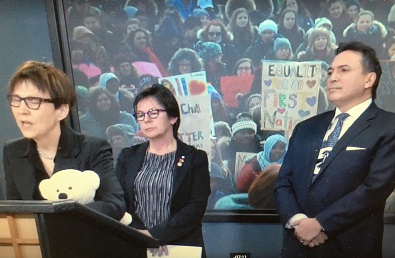 The Assembly of First Nations and the First Nations Child and Family Caring Society have launched a new push to get the federal government to comply with a Human Rights Tribunal ruling on the care of on-reserve First Nations children.

During a joint news conference in Ottawa this morning, AFN Chief Perry Bellegarde and the executive director of the Caring Society, Cindy Blackstock, reflected on the 10-year fight for equal child welfare services for on-reserve children.

“I was shocked we had to file this complaint in the first place to get the Government of Canada to quit discriminating against little kids.” she said. Blackstock added she is tired of hearing apologies, condolences and promises. She says what is needed is action because children’s lives are on the line.

The complaint was filed in 2007, but years of legal wrangling followed. In January 2016, the Canadian Human Rights Tribunal ruled the complaint was valid and ordered the federal government to take immediate action to comply.

“We need to do more in the immediate term while the longer term of  reform is worked out,” he said. “Reform has to include keeping children with their families whenever possible. It is simply not acceptable that so many children are taken from their homes because of poverty.”

Since the ruling was issued more than a year ago, two non-compliance orders have been filed with the Human Rights Tribunal, claiming the federal government is not fulfilling its obligations to correct the discrimination.