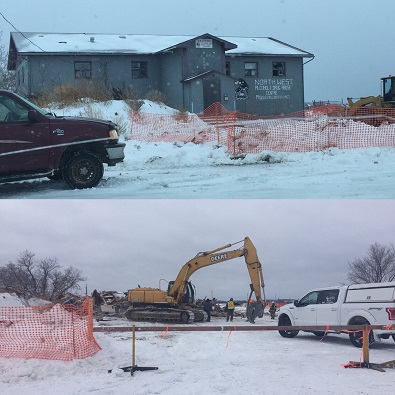 The demolition before and after. Photo courtesy Northern Village Ile-a-la-Crosse, Facebook.

Anyone who went through the Ile-a-la-Crosse Boarding School system has the chance to watch a video the demolition of the former boy’s dormitory, which was broadcast live on Facebook Wednesday morning.

Video of the demolition can now be viewed through this link.

Ile-a-la-Crosse Mayor Duane Favel commented on the Northern Village’s decision to do so, saying “I’m not sure how that’s going to affect people but we felt it’s important if people want to watch, they can engage in our Facebook. It’s important, I think, to the community of Ile-a-la-Crosse.”

He said a few of the survivors he’s spoken to “felt good that the building was being torn down, although the memories will always be there. But they’re hoping that this is the beginning of a healthy process in terms of coming to terms with the experience of being sent there.”

Not all pieces of history are happy and that’s the case with Ile-a-la-Crosse’s boarding school system, which has been compared to the Indian Residential School system for the abused endured by its students.

Former students detailed their abuse at a gathering in Ile-a-la-Crosse this summer, where Indigenous Affairs Minister Carolyn Bennett was present.

Over the years, almost every building associated with the boarding school has either burnt down or been torn down. Ile-a-la-Crosse’s high school and medical complex now stand where the convent and girl’s dorms used to be.

At one point it had been converted into the Northwest Alcohol and Drug Abuse Centre. Many, including Favel, consider it a cruel irony to treat people for addictions in a building that holds such haunting memories.

The sign for the abuse centre remained up in the Facebook live feed as heavy equipment spent hours tearing into the building and turning it to rubble.

Many drove by and stopped to say goodbye to the building in their own way.

Favel said the teardown is only one piece of the puzzle, as survivors of the boarding school have never been compensated in the way Indian Residential School survivors were.

“We’re still not there. And hopefully we’ll continue to bring attention that this school was no different than any other (residential) school in the province and so, just because we’re a Metis community they should still find a process to bring closure for all the people that attended the school,” Favel said.

He said he wants the federal government to engage in bringing “complete closure” to former students.