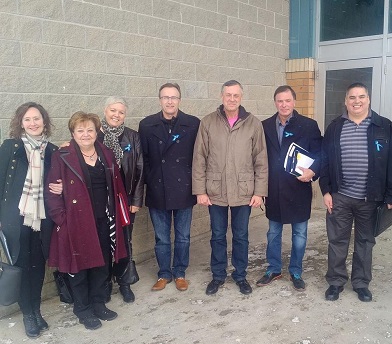 High-level provincial representatives returned to La Loche this week, meeting with local leadership for the first time since the one-year anniversary of the mass shooting that took four lives.

Earlier this year, the high school’s acting principal was among those criticizing the government’s lack of follow-through on their promises in the year since the shooting.

“I’d like to believe that their visit was to reassure that we have not been forgotten and the promises that were made were still trying to be fulfilled,” said Mayor Robert St. Pierre.

“For me it shows that they still care and they still want to move us forward.”

The ministers met with mayor and council and then went to meet with teachers, he said.

Wednesday was a first-time meeting between the visiting ministers, some of whom are new to their positions, and La Loche’s mayor and council, which switched over in October.

St. Pierre said he believes they built some rapport with the ministers.

“They’re the leaders, they’re the decision-makers… so having that openness and being able to have that dialogue at that level and have them understand our perspective and try to help us move ourselves forward is important,” he said.

But, does that sense of optimism extend to everyone in the community?

“It’s hard to say because things of that nature – especially when you’re talking about healing – takes time. So we won’t really see anything really substantial I the course of day to day,” he said.

Cabinet ministers have a lot of food for thought after receiving updates on the La Loche subcommittees on housing, education, health, and infrastructure.

St. Pierre said they voiced a lot of concerns, including getting more housing to staff services like healthcare and education, where there’s a great need to fill positions.

“You want to get more people into the health centre to provide those services, but they have no housing to come to. We can’t staff,” he said.

He said he’s confident issues like this will be addressed by the province.