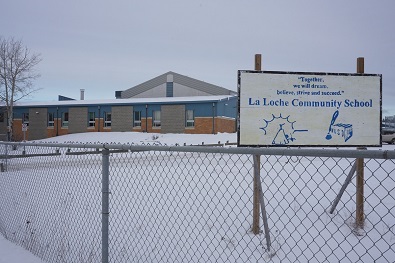 La Loche’s mayor and council have told the province they support the idea of creating an autonomous school division.

The goal was to look at how the northern village of about 3,000 people is recovering from the mass shooting that took place last year. Four were killed, seven were injured, and a teen from the community has since entered guilty pleas.

Mayor and council were also prepared to give an update on four different intergovernmental subcommittees that have been formed since then: among them, education.

Mayor Robert St. Pierre said they took this opportunity to address Minister of Education Don Morgan on some of their key concerns.

“Northern Lights School Division has done us a disservice in the course of time and so I’ve requested that maybe we have our own school division,” he said.

He estimates they make up a quarter of the Northern Lights School Division’s (NLSD) student population “but on the funding aspect of it I don’t think we got a quarter of what’s delivered to La Loche.”

NLSD Director of Education Ken Ladouceur agrees the La Loche student population makes up about a third or a quarter of the students they serve.

St. Pierre said his and council’s concerns are based on conversations in the community.

“Talking to the staff and talking to things since the incident, the schools themselves have brought the service that they needed and they rose up to the challenge without the support of the Northern Lights, basically,” he said.

Ladouceur said the school division’s response after the shooting was focused on listening to community members and “asking them what they need.”

This, he said, is what led to adding more social workers in La Loche’s schools, adding security, and changing the number of superintendents and consultants providing internal support to La Loche.

“I think I have a strong relationship with La Loche and the community. It’s certainly one of support for the community itself and the village,” he said, adding he feels this about himself personally and about the school division itself.

In response to the idea that elected leaders want autonomy from NLSD, Ladouceur said the division prides itself in its relationships.

“That’s unfortunate. That’s certainly not something we’d like to hear because really we see ourselves supporting out school.”

Overall, Ladouceur said he supports whatever is in the best interest of the students, but “I believe there’s so much more strength in the larger group and in the larger organization, the larger structure that we can provide so much more expertise and a variety of support.”

The nearby community of Ile-a-la-Crosse has its own school division.

It’s unclear where mayor and council’s request to the province may lead, especially considering the current uncertainty around school divisions in Saskatchewan.

The province is in the process of coming up with a response to a report it commissioned last year which floats the possibility of removing all of 18 school divisions, instead creating one provincial school board.