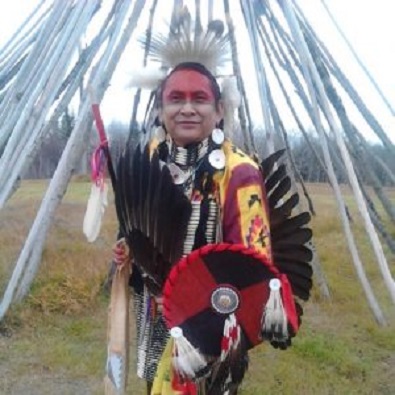 The Federation of Sovereign Indigenous Nations is extending condolences to the family of famed pow wow dancer and Aboriginal rights activist Frank Asapace, who passed away on Monday.

Asapace grew up on the Kawacatoose First Nation north of Regina and was a champion traditional powwow dancer, who once performed for Queen Elizabeth II.

He participated in a lot of traditional ceremonies, and he was a proud member of the Native American Church. He attended the protest in Standing Rock as a water protector.

In 2008, he appeared in the film The Englishman’s Boy, a CBC adaptation of the Guy Vanderhaeghe novel about the Cypress Hills Massacre.

He also worked as a round dance and powwow announcer, alongside AFN Chief and former FSIN Chief Perry Bellegarde, and more recently appeared in his powwow regalia in a music video for rapper Joey Stylez.

The FSIN says Asapace made friends wherever he went, and was adopted into a number of families. In a release, the federation says he brought laughter and good humour, and never dwelled on the negative.

“He made me proud of who I was, and where I came from,” said Kawacatoose Band Councillor, Delmont Asapace, who is also Frank’s nephew.

The FSIN says Asapace will be remembered as a kindhearted and loving father of five who never cast judgment on others.

Wake services will be held at the Kawacatoose First Nation on Wednesday with funeral services to follow on Thursday around 10:00 am.