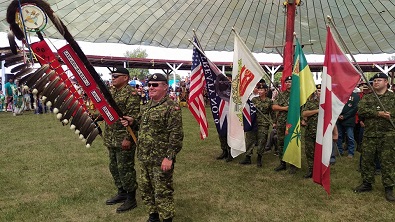 On Monday, at least a dozen uniform-wearing Grade 11 and 12 students from Beardy’s and Okemasis wore uniforms and marched in unison before they were sworn in to a first-of-its-kind military reserve program.

“We’ve never had an all-Indigenous program like this before,” said Second Lieutenant Evan Brockman.

He said the Canadian Armed Forces have an open policy to all social and religious backgrounds, and “this program is just one way we tried to reach out to Aboriginal communities to help them get involved.”

Fifteen youths from the community are signed up for the part-time training with the Indigenous Basic Military Qualification Co-Op, band councillor Kevin Seeseequasis said in a Beardy’s and Okemasis First Nation news release. Most are around 17 years old, and at least three girls have signed up already.

“The idea here is that we are qualifying them with their basic training and then if they wish they can stay in and continue on with their training to become fully qualified soldiers,” Brockman said.

The basic training will set up students with the opportunity to gain part-time employment with the Armed Forces, and if they don’t move on with the military they will still have emergency medical training and other skills that can be used in civilian life.

The event was steeped in the customs of Beardy’s: band members were set to perform a smudging ceremony and local leadership was set to deliver speeches. Brockman said those portions of the event has been organized by the community, which shows the cooperation between the Canadian Forces and Indigenous groups.

“I have noticed that Beardy’s does tend to be quite active within the Armed Forces and have a proud history for their area. And with this program along with other programs such as Bold Eagle it does look like they will be offering quite a few more candidates now and into the future,” he said.

Bold Eagle is a summer military training course that invites Aboriginal youth to train for the primary reserves. It includes a special cultural component.

Seeseequasis is a former Captain with the Canadian Armed Forces, and was involved in a community advisory group for this military co-op, which held meetings throughout last year.

“These young individuals are gaining employment while continuing their education, they will make friends and memories that will last a lifetime, and have joined the ranks of a long list of honourable warriors who have worn the uniform proudly and served in the Canadian Forces from the Beardy’s & Okemasis First Nation,” he said in a news release.

Basic training for the starts in Saskatoon on Tuesday.