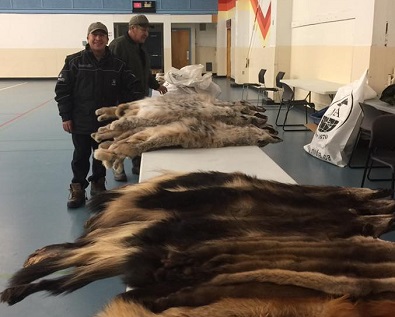 Fur trappers found a silver lining at the annual Trapper’s Table in Prince Albert over the weekend.

Organizers expected a low turnout because it’s been a tough year for fur prices and for trapping weather.

This year’s attendance numbers show less than half as many trappers showed up this year when compared to 2015, but Northern Saskatchewan Trapper’s Association Vice President Gregg Charles is pleasantly surprised by the turnout.

“We didn’t expect that many but the turnout was pretty good at the end,” he said.

He said a few trappers had saved their pelts from last year, which kept some momentum this year.

“I think a lot of those people that had their pelts, they had them over one year and accumulated some of those pelts that they had and then they came and sold them over there” at the Trapper’s Table, Charles said.

Although prices aren’t ideal, the four fur buyers, which includes North American Fur Actions, are holding steady with what they’re paying for items like martens and coyotes.

“A lot of those prices that they say were down were actually pretty well the same as last year and the year before. So it wasn’t really that bad,” he said.

Charles said another point in the favour of Northern Saskatchewan trappers, is that the world’s biggest fur buyer is showing prices in American dollars not Canadian.

He added that a number of trappers from Southend have been hampered by open lakes, which keep them from snowmobiling to their main trapping area.

He said some are already planning ahead to spend the first part of November in 2017 on the trapline so they can start early.

A video of a trapper from the Turnor Lake area out on the trapline can be viewed here.