In year-end interview, Premier explains his view of “nation to nation” relationship with First Nations 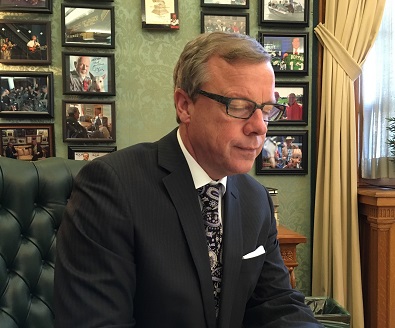 Saskatchewan Premier Brad Wall wants to do more to engage Aboriginal participation in the work place, but he is not prepared to offer revenue-sharing deals with First Nations nor does he feel an obligation to negotiate separately with each of Saskatchewan’s 74 First Nations on programs and policies that may affect them.

The concept of “Nation to Nation” means different things to different people; for the Premier it means recognition of sovereignty and a duty to consult on projects that may impact First Nations.

However, he is not of the view that it requires separate negotiations on programs and policies with each of Saskatchewan’s First Nations.

Despite the downturn in the economy, the Premier does see room for optimism. He says the oil patch is showing signs of rebounding, and a mega pipeline project has received federal approval. The Premier expects some opposition and even protests, but he says laws will be enforced.

“The rule of law has to prevail in terms of protests or those that would want to block these things for reasons. Just sort of de facto, we are opposed to those sort of things, regardless. Those kinds of reasons are out there, but I don’t think they will prevail in the end,” he said.

Enbridge has been given approval to build a major pipeline from Alberta, through Saskatchewan, into Manitoba and down to the states. The project will inject more than a billion dollars into the provincial economy.  The new state-of-the-art pipeline replaces an older outdated line.

In the year end interview, the Premier warns of tough decisions ahead to deal with a billion dollar deficit.

He says the government must act quickly and decisively even though it will involve some unpopular decisions.