Police Chief on Regina’s North Central: ‘2017 is going to be a very good year for us’ 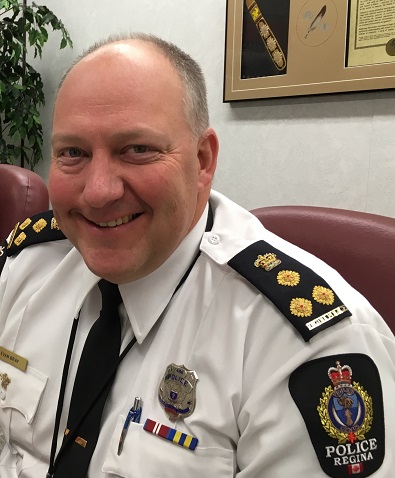 He has only been on the job for a couple of months, but Regina’s new police chief already has big plans for the new year.

Police Chief Evan Bray laid out his goals and objectives during a year-end interview with MBC, saying above all, he’s aiming to improve police-community relations. This is especially important with the Aboriginal community, Bray said.

The police chief spent a lot of time on the streets before sitting behind a desk: most of it in the city’s North Central region. North Central is the city’s highest crime rate neighbourhood, responsible for about 70 per cent of all calls for police service.

Despite its reputation and problems, Bray says it is an integral part of the city that needs more attention.

“That’s a really big part of it, continuing to build relationships, work with that community,” he said.

“I believe in that community completely so I think we are going to continue to build, so I’m excited. 2017 is going to be a very good year for us.”

Regina has consistently scored as either the murder capital of Canada, or the city with the highest overall crime rate. It’s a distinction the chief would rather not have.

He says community engagement is just as important as law enforcement when it comes to reducing crime.

“Every time a front-line officer or anyone in our building comes in contact with someone in the community, we need that community member to think, ‘wow that was great, that was professional.’ Even in the worst possible situation, we need to leave a positive impact.”

Before entering the police service in 1995, Bray worked in the media as a radio announcer and television weatherman.

He is forecasting sunny days ahead for the department.