First Nations and northern Sask. to receive $4.4M in funds to celebrate Canada 150 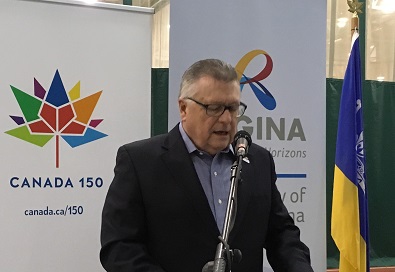 Next year, millions of dollars in funding will be distributed to dozens of Saskatchewan communities to help them celebrate Canada’s 150th birthday next year.

Four Northern Saskatchewan Communities and eight First Nations are among the recipients of $4.4 million in federal funding to upgrade culture, youth and recreation facilities.

Federal Public Safety Minister Ralph Goodale made the announcement at the field house in Regina Tuesday morning, saying in all, $5.7 million will go to 62 projects in the province, with local organizations matching the amount.

Everything from a skateboard park at the Whitecap Dakota First Nation, to solar panels at Green Lake recreation centre are among the destinations for the new money.

Goodale says it was not easy determining who should get funding, but it was important that the north and First Nations be included.

“Indigenous people and reconciliation was part of the themes,” he said.

“So a real effort was made to reach out to Indigenous communities and northern communities.”

Goodale says a lot of the funding will go towards upgrades at community rinks, recreation centres and community halls.

He adds that culture and youth are the main focus of the funding.

The Canada 150 program will provide a total of $150 million over two years for local improvements to communities across the country.

A list of the First Nations and northern communities to benefit from the Canada 150 can be accessed here.