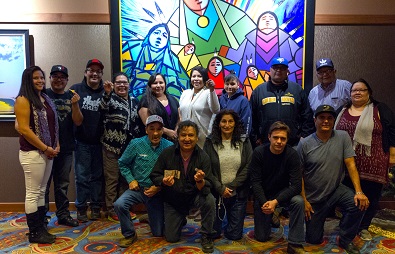 The band staff holiday party for a southwest Saskatchewan First Nation took an emotional turn this week when leadership chose to use the occasion to hand over brand new house keys to more than a dozen families.

The Nekaneet First Nation, near Maple Creek, has spent the past five months working with a Calgary-area contractor, called Expert Home, to bring 14 modular homes to the community.

“We felt happy and proud that people were getting homes. Like, these are brand-new, fully furnished houses that they’re getting,” he said.

Joanne Mosquito is among those moving into the new homes. She witnessed her family’s house burn down this spring.

The news release states that the Mosquito family was “awarded a reprieve on her lease for one year, so she can bounce back from losing her home and all of her belongings in the spring fire.”

Mosquito shed tears when receiving her home keys on Monday, which came after she spent more than half a year working to rebuild since losing everything in the fire.

“They’re a nice, hardworking family and they did maintain their home good so it feels really good that they get a fresh start,” Fourhorns said.

Selena Taypotat, project manager, said they worked hard through a partnership with the Bank of Montreal and Expert Homes. She said the selection process was not easy. “We had many applicants, but we formed a committee of our community leaders, elders, and prominent citizens to help us decide who will get a home,” Taypotat said in the news release.

Fourhorns says the effort to acquire the homes has been a long time in the making as Nekaneet looked to address housing shortages that are prevalent for its community of about 500 members, but also on First Nations across Canada.

Four years ago, the Nekaneet grew impatient with waits for Indigenous and Northern Affairs Canada funding through the Canadian Mortgage and Housing Corporation (CMHC) to be available.

“The process with Indian Affairs is kind of slow with CMHC so we decided to go on our own and we pulled our own funding,” Fourhorns said.

Nekaneet was able to secure a loan, and work was underway earlier this year.

However, there was one final delay.

“The houses were done last week. We were going to give them out last week. But it was so cold, it was in the -20 to -30C, and this week it was starting to warm up so we sat down and decided ‘hey, let’s invite these people to the staff party,'” he said.

Now, Fourhorns says Nekaneet is focused on developing its own housing authority, and wants to be able to help off-reserve members as well.

“Anything is possible. You can build anything without anybody’s help if you work together. If people work together, you can accomplish a lot of things,” he said.