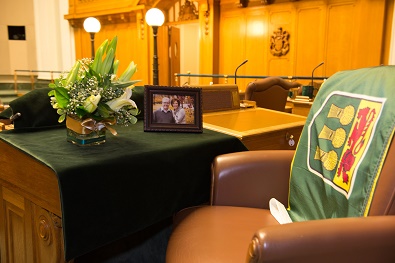 Photo courtesy the Government of Saskatchewan.

A draped chair, flowers on the desk and a photo of 63-year-old Roger Parent and his wife has been set up in the Saskatchewan Legislative Chamber in honour of the Metis member who died suddenly last night after a recent diagnosis of cancer.

Parent has been a Saskatchewan Party  MLA since 2011 when he was elected in Saskatoon.

Before that, he acted as a consultant for many organizations that helped set up Aboriginal businesses. He also worked with the homeless and was a member of the Metis Nation of Saskatchewan.

Premier Brad Wall says his death is a huge shock.

Parent continued his work in the assembly through much of the fall sitting and only learned he had cancer in the past couple of weeks.