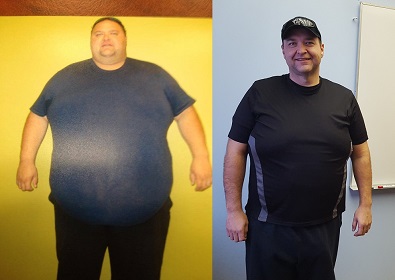 At left, Teco Bird at 543 pounds in September of 2013, compared to his size now. Left photo provided, right photo by Chelsea Laskowski

A La Ronge man who documented his drastic 270-pound weight loss on social media has a flat stomach for the first time in his life.

Teco Bird’s flat stomach was three years in the making after he started his weight loss journey at 540 pounds in September of 2013.

With all the pros of getting healthy, there was one con: loose skin around his stomach, arms, and chest.

Bird said the excess skin was holding him back.

“I had read before online where people had lost massive amounts of weight and the actual weight loss impeded them from proceeding any further, and I was like ‘that can’t be true.’ When I actually got to that point, like, you lose so much in your belly area it starts hitting your legs and it’s really uncomfortable,” he said.

The doctor removed 23 pounds of skin, which is a drop in the bucket of how much weight Bird has lost.

He vividly remembers the Sept. 11, 2013 weigh-in that led a doctor to tell Bird he needed to lose weight to even be eligible for bariatric surgery to shrink the size of his stomach.

“That was one of the most embarrassing days of my life, when I actually stepped on that scale I didn’t realize how heavy I was. But that was the weight: 543.7 pounds,” Bird said.

That day, Bird committed to changing his life by tracking his meals, eating right, and exercising everyday.

He knows the risks of gaining weight back, which he describes as a “rubber band effect.”

“You lose so much and you’re pushing to achieve that goal and you get there and then all of a sudden your body wants to be big again. Or you start eating unhealthy and it doesn’t take long to gain weight. It’s tough to lose weight but it’s really easy to gain weight,” he said.

That’s why he got bariatric surgery to ensure he never got back to the size he once was.

His journey has almost entirely taken place online, with his Facebook page “Get Off Your Ass Diet” chronicling years worth of milestones. This includes a video of the first time Bird was able to fit into a roller coaster seat.

His story is particularly relevant in northern Saskatchewan, because Aboriginal people have higher rates of diabetes and other weight-related health issues.

Locally, Bird said it’s great to have role models like Lac la Ronge Chief Tammy Cook-Searson who talk fitness and take part in health challenges to encourage each other.

Now when he recovers from the surgery, he won’t need to wrap his stomach to keep it from hitting him when he runs.

“Exercise gets addicting after you do it long enough, so you sure miss it after you stop. But I’m looking forward to running now without having to put those sauna bands on,” he said.

Birds surgery is considered cosmetic and cost him thousands of dollars.

You can listen to an audio piece on Teco’s story here.