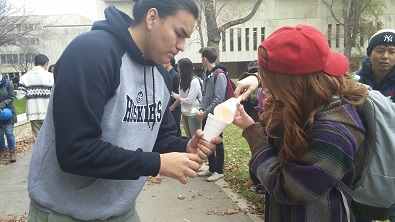 Leaders in Saskatchewan and Canada rose with heavy hearts on Monday to speak about the sixth death of a young girl in northern Saskatchewan in the past month.

A 13-year-old girl from the La Ronge region died on the weekend. Desnethe-Missinippi Churchill River Member of Parliament Georgina Jolibois was the first to speak publicly about the suicide.

During federal Question Period, she extended condolences to the members of her riding and called for a culturally appropriate, long-term approach to mental wellness.

“Will this Prime Minister stand up and address the immediate needs for Indigenous mental health in the north? How much louder do our kids need to be?” Jolibois asked.

Minister of Health Jane Philpott offered condolences as well, and said “we need to be thinking not only of how we can support these families and these communities in the short term as we are working very hard to do, but we must think of the long-term solutions.”

The disturbing trend this month has seen six lives lost in northern Saskatchewan – all were Indigenous girls between the ages of 10 and 14.

When contacted over the phone on Monday, Irvine said situations where people feel connected to someone who has committed suicide – whether by geography, family, or by life experiences – they are more vulnerable.

“When there is a pattern of suicides within community areas – linkage either geographically or by social networks – there can be an increased risk of acting in a way that’s similar; so attempts, thoughts, or actual suicides may increase,” Irvine said.

Irvine said he is cautious in talking about the suicides because there are risks to giving out too much information.

He did say there has been urgency in preventing more deaths since the first suicide in the region happened earlier in October, and that hasn’t waned.

Saskatchewan’s NDP says the causes of these deaths aren’t anything new.

“These deaths are the result generations of colonial violence, generations of governments that sought to destroy Indigenous families and build barriers to block Indigenous peoples from reaching their full potential,” she said, referring to the Pass System, 60s scoop, underfunding of child welfare and schools, and Indian Act, among other things.

Rancourt and her NDP colleague Buckley Belanger said the Truth and Reconciliation Commission calls to action offer a path to partnership between Indigenous and non-Indigenous groups, and need to be responded to.

Corey O’Soup is taking on that role effective Tuesday.

“I would indicate very much support in principle for the idea that Mr. O’Soup’s first order of business would be the plight of northern youth in particular, and with specific focus on the issue of depression in suicides we have seen and the attempted suicides,” Wall said.

Locally, students at NORTEP and NORPAC in La Ronge are planning a vigil for Tuesday night in memory of the girl who died on the weekend.