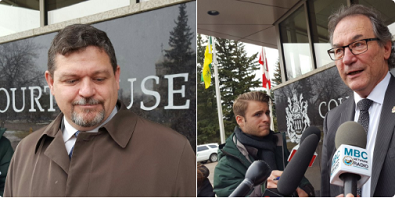 There will be no trial for the La Loche mass killer.

He entered guilty pleas for murder and attempted murder of 11 people in Meadow Lake court on Friday afternoon.

The 18-year-old’s name is protected by the Youth Criminal Justice Act (YCJA), because he was a youth and student at the La Loche high school when he opened fire on Jan. 22.

All victims were wounded at the school except for teen brothers Dayne, 13, and Drayden Fontaine, 17, who were killed at a La Loche home earlier on Jan. 22.

Crown prosecutor Lloyd Stang stayed the charge of unauthorized possession of a firearm. He also submitted to reduce the first-degree charges relating to Dayne and Drayden down to second-degree, and said there were a number of factors leading to that.

“We certainly think that the evidence supports the decisions and the pleas that were entered today. As well, we believe it was in the public interest for these pleas to go in as they did today,” Stang said outside court.

Defence lawyer Aaron Fox told court his client speaks Dene as a first language but is proficient in English.

Fox said the guilty pleas for first-degree murder of Marie Janvier and Adam Wood, second-degree murder of Dayne and Drayden, and attempted murder of seven others were explained to the 18-year-old in both languages.

The 18-year-old appeared alert and not tense while sitting in the prisoner’s box, and responded when his name was mentioned.

Most family members of the victims and of the 18-year-old were present by video link from La Loche. Court was quiet from both locations. This is likely because victims and their families had previously been made aware of which pleas were going to be entered.

In court Stang said the RCMP, Crown, and Victims Services had made them aware of the impending pleas.

Fox asked for a psychological and psychiatric report to be done before sentencing, which is allowed under the YCJA. It can include analysis of possible issues like emotional disturbance, mental development, mental disorder, Fox said.

Stang is continuing to pursue an application for the 18-year-old to be sentenced as an adult. Outside court, he did not get into details of why.

Fox is pursuing a youth sentence.

“You’re looking at the question of moral culpability, recognizing that you’re dealing with a young person,” Fox said, adding that there are number of other factors to be considered.

This includes lack of criminal record, lack of previous involvement in the law, level of cognitive development, level of social development, background and Gladue factors, he said. Fox did not get into detail on which items he thinks are relevant to his client’s situation.

Arguments for and against an adult sentence will take place at the La Loche sentencing hearing. The date is not set in stone but will either be mid-May or mid-June.

Judge J. McIvor emphasized the importance of holding that hearing in the community where the fatal events occurred, saying “they’re tragic to everyone involved.”

The 18-year-old will remain in custody by law until the upcoming hearing. Before court adjourned, Judge McIvor said his name and said “good luck to you sir.”