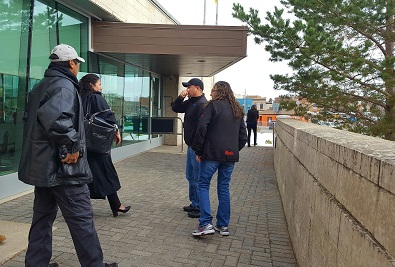 Warren McCallum (centre) speaks to his lawyer after leaving court on Oct. 12. Photo by Chelsea Laskowski

The urban councillor position for Peter Ballantyne Cree Nation has sat empty for more than 10 months, but a federal court decision changes that.

The Peter Ballantyne Cree Nation Elder’s Council decision to remove Urban Councillor Warren McCallum from office – made Dec. 10, 2015 – has been set aside by a Federal Court Justice St-Louis.

McCallum has been reinstated effective October 19 and he has been back in the office since then.

Last fall, hundreds of people from PBCN signed a petition saying that McCallum, as the elected urban councillor, had not abided by the PBCN Election Code 2014’s Standards of Conduct.

This petition – and how many signatures were on it – are critical to what followed.

The petition was handed to the Elder’s Council by Chief Peter Beatty in November. The Elders were tasked with finding whether the petition met the band’s custom laws, which require a threshold of 25 per cent of electors in the affected community to sign the petition in order for action to be taken.

In calculating the percentage, the Elder’s Council used the number of urban area members who voted in the 2015 election, instead of the total numbers of electors in the urban area.

In Justice St-Louis’ ruling, she says the Elders justified this by saying that the number of electors was not available and unknown. This justification, St-Louis writes, is “unacceptable given the gravity of the consequence.”

She writes that the band’s Election Code is “unequivocally clear” in its need to meet the 25 per cent threshold for the petition. Justice St-Louis has ruled there is no evidence that 25 per cent of electors signed the petition, and this flaw is “fatal to the removal process.”

Justice St-Louis’ ruling does not weigh in on McCallum’s contention that the Elder’s Council did not have the power and authority to remove him. His claim was that “the role of the Council of Elders is essentially to mentor and guide the Chief and Council and not to remove Chief and Council from office, unless addiction issues are raised.”

She also does not weigh in on McCallum’s opposition to the issues raised in the petition.

The court will not grant McCallum’s request for costs “to compensate damages resulting from his removal from office.”

Many outspoken urban members have been unsatisfied throughout the process, and it’s unlikely this federal court decision will settle that unrest.

There’s no word yet on whether this ruling will be appealed.