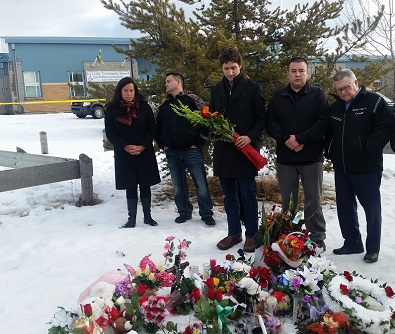 Northern Saskatchewan’s federal representative has written an open letter to Health Minister that takes aim at the Prime Minister’s pledge to be there for La Loche after the events of Jan. 22.

MP Georgina Jolibois writes that this is a follow up letter to Minister Jane Philpott, coming nine months after the “profoundly painful” mass shooting in La Loche that took four lives and injured seven people.

Jolibois thanks the Liberal government for offering sympathy, words of support, and for replying to her previous letters.

However, she also offers a strong criticism of Prime Minister Justin Trudeau’s late January pledge to “be there” for years as “we look to grieve, to heal, and to move beyond and thrive.”

Jolibois writes that the people of La Loche understood that to mean the services they needed to grieve, heal, and thrive would be made available – something she says has not happened.

“Since the tragedy, the much-needed services are piecemeal and inadequate, and the federal government is nowhere to be found.”

Jolibois says the feds seem to be relying on the province alone to provide mental health services after a one-time event that hit the community hard, but extra attention from the feds is needed too.

She adds that closing the health services gap between remote areas and the rest of the country, are part of the reconciliation committed to by the Liberals through the Truth and Reconciliation Commission.

Jolibois’ call is for immediate and urgent investments in mental health services in La Loche and communities like it.