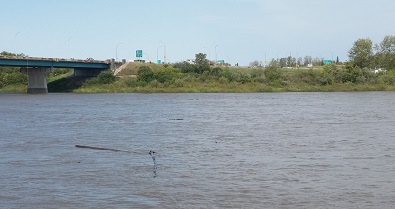 The fast-flowing current brought logs and debris along the river in Prince Albert. Photo by Chelsea Laskowski

Heavy rainfall from Alberta in recent weeks has increased water levels in the north Saskatchewan River, and right now that water is flowing through Prince Albert.

That drastic change is taking shape on the river in a number of ways, with the fast-flowing current carrying floating debris.

The majority of the logs are flowing through uninterrupted, but some are catching on the piers of the the bridge and train bridge. A log jam has also formed at a blockade that’s been set up to keep contaminated water from the Husky Energy oil spill from entering the water treatment plant.

The City of Prince Albert says the water is expected to reach its maximum levels on Wednesday night, rising half a metre more. The flow is supposed to taper off as it carries on downstream.

The City says any foam or brown sheen to the water is related to the increased water level, similar to what happens in the spring during the thaw breakup. It did not mention any connection to the Husky spill.

The City adds that the water is safe and is warning residents to stay away from doing activities along the riverfront.

A video of the water flow can be viewed here and here.