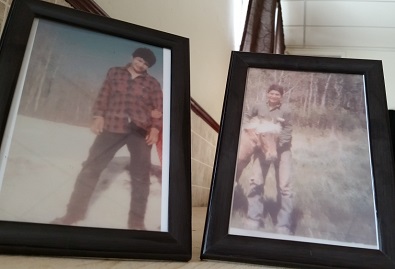 Stuart Amyotte pictured in his younger years as part of displays for his wake. Photo by Chelsea Laskowski

A Prince Albert man who brought his cultural teachings to First Nations and Metis people from all walks of life, has died.

Stuart Amyotte was most recently the Elder at the Metis and Indian Friendship Centre, but worked there for well over a decade beforehand. He died Wednesday night from health complications related to recent open-heart surgery.

One thing that stood out to Executive Director Janet Carriere is Amyotte’s gentle way with homeless people, youths, those dealing with addictions, and gang members.

“He would work with the population that the rest of the community didn’t work with and he did it well because he always believed there was potential in everyone and if he could get them turned on to the right path and they would do well. And so there’s a lot of people in our community that he’s helped to get clean and sober and on the right road,” Carriere said.

She added that Amyotte struggled with addictions in younger years before going on to help others.

Amyotte was a fixture at the centre’s powwows, feasts and holiday celebrations. He also ran sweats whenever his health would allow.

“He loved ceremonies. He loved round dances, powwows, and I think if he would have had his way and we had the money we would have been hosting something every week,” Carriere said.

Even when Amyotte was struggling with serious health issues, he would forge ahead promoting culture and helping others.

“He would never stop. You know, sometimes I would tell him ‘Stuart, you got to slow down. I need you.’ And he would say, ‘no, Creator wants me to do these things and I need to be doing them.’ He just never thought of himself. He always thought of everyone else first,” Carriere said.

When she took on her role a few years ago, Amyotte was there to provide guidance.

The Friendship Centre will honour a wish Amyotte had, to hold his wake and funeral in the place he served for so many years.

The wake and funeral for Amyotte will be held on Friday and Saturday. Times are still being arranged.