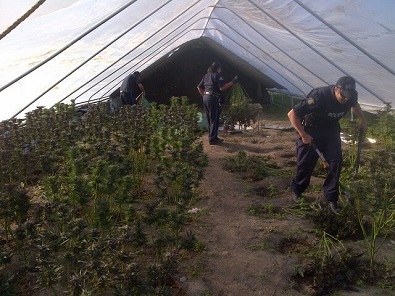 Police have several people of interest they want to talk to in connection with a major marijuana bust on a Saskatchewan First nation, but so far no charges have been laid in the half-a-million dollar haul.

Officials are not naming the reserve, but unofficial sources say it was the Little Black Bear First Nation, which is part of the File Hills Tribal Council.

The drug raid on the reserve took place on Monday. It involved the seizure of plants, processed marijuana and equipment.

The Tribal Council is not commenting on the bust, but Tribal Council Police are providing some information. Lennard Busch described the operation as fairly large, but pretty simple.

“It’s pretty rugged, but somebody did a lot of work — they hauled a lot of equipment in there,” he said. “There is no road, just a bush trail — I don’t even know if I could have got in there with a quad.”

The police chief says 450 plants and about 45 pounds of cannabis were seized. He estimates the street value at about 500 thousand dollars. Chief Busch says the investigation is ongoing, but he expects arrests shortly.

“Well there is certainly some people we want to talk to about it. We are processing some of the evidence — fingerprints and stuff like that,” he said.

The grow-op raid involved the File Hills Police, RCMP and even the military, which did aerial surveillance to confirm the greenhouses were in operation this year.

They have been checked for the last two or three years, but there was no activity until now.

There is no word on when charges might be laid.