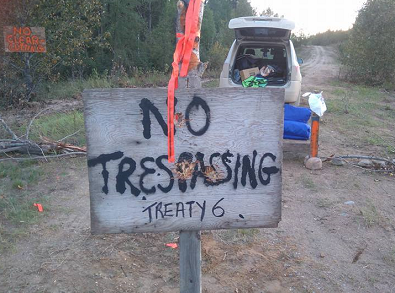 Idle No More co-founder, Sylvia McAdam Saysewahum is calling for more supporters to protest against what she says is unauthorized clear-cutting of forest on Treaty 6 land near Leoville.

She is posting information on her Facebook page, calling for others to join her and take a stand. She also claims that a no trespassing sign she posted was shot at earlier this week.

In a video on her Facebook page, she says the incident “freaked her out,” and she has since called the RCMP.

“These are the hunting lands of my people and most of the land is getting clear cut,” she said. “These are the lands where we used to pick our medicines, get our water — all of that is getting destroyed.”

McAdam Saysewhahum is also calling on people to contact Sakaw Askiy, an Aboriginal forestry company based in Prince Albert, to complain about the logging in the area.