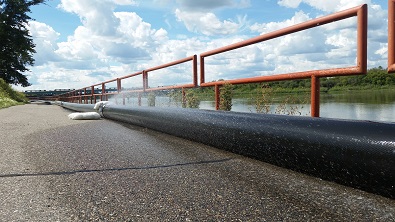 The leak nearest the Historical Museum after it had been clamped. Photo by Chelsea Laskowski

There are some riverfront frustrations for a water pipeline in Prince Albert.

Temporary lines have been delivering water 30 kilometres from safe water sources after the Husky oil spill, and on Thursday morning the City was alerted to two separate leaks near the Prince Albert Historical Museum.

Alain Trudel with Public Works has his suspicions as to what caused it, but isn’t sure.

“It looks like somebody deliberately tried to punch holes in the line. It’s about a one-inch cut in the line and it looks like sort of, kind of a knife stab that type of thing because it’s a very sharp-edged cut on the line in two locations,” he said.

The thought of someone intentionally doing harm after all the City’s hard work to make sure people have clean and safe water, is troubling to Trudel.

“It’s kind of disheartening that someone would go to that kind of extent to do a practical joke or try to sabotage it, I guess.”

There are clamps over the holes as a solution to the water leak, but the clamps meant for solid pipes and this pipeline is rubber so some water is still flowing out.

Trudel says they likely won’t be replacing the 60 feet of pipeline that’s been affected because it’s very expensive.

Trudel says the police and city can’t monitor the entire length of the pipelines because they stretch a long area.

The shoreline cleanup from the Husky oil spill, near Maidstone, is currently on hold because of expected water level increases over the weekend.

Heavy rain in Alberta could bring the water up to two metres higher than it currently is.