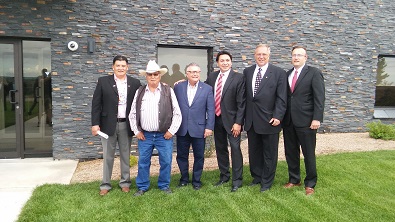 New drinking water and wastewater infrastructure has been announced for the Whitecap Dakota First Nation.

Construction on the $13.5 million dollar project will begin immediately and is expected to take nearly two years to complete.

The project will be funded equally by the federal government, the provincial government and the Whitecap Dakota First Nation.

“We all win, even the City of Saskatoon wins because when rural Saskatchewan is doing well, the cities are doing well also because who do we buy all of our goods from?” said Bear. “Everybody wins in this announcement today.”

He says plans for a hotel, conference centre, business centre and more residential housing can go ahead with this new infrastructure.

The funding was made available through the provincial-territorial infrastructure component for national and regional projects.

Chief Bear says this funding was essential because there would have only been three million dollars available through Indigenous and Northern Affairs grants.