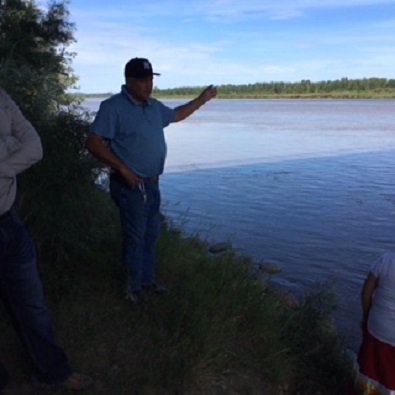 Poundmaker Chief Duane Antoine laments the impact of an oil spill on the North Saskatchewan River. Photo courtesy of Rory MacLean of the FSIN.

At least one First Nations leader says the Husky Energy oil pipeline spill into the North Saskatchewan River might have been avoided if industry had provided meaningful consultation with First Nations about the construction of pipelines in traditional Treaty 6 Territory.

Representatives of the FSIN, the Battlefords Tribal Council and Battlefords Agency Tribal Chiefs are speaking in the wake of the Husky Energy oil spill in the North Saskatchewan River.

They addressed reporters this morning at a location along the river in the Battlefords.

Chief Crystal Okemow of the Lucky Man Cree Nation says this is an “eye-opener” for First Nations and industry — but she also believes this was something that was bound to happen.

Okemow says First Nations need to become a part of the monitoring and regulatory aspect of the oil industry — adding this may have been avoided if First Nations had a greater say on the location of pipelines.

“Because the water and Mother Earth mean so much to First Nations people, the duty to consult and accommodate not only gives us the opportunity to protect our way of living,” she says.  “And if we were given that opportunity, maybe this could have been handled better.  Maybe it wouldn’t have been such a big leak.  It could have been different.  Maybe the pipeline could have been moved further away from the river itself.”

She believes their children will still be dealing with the effects of the spill years from now.

Sweetgrass First Nation Chief Lorie Whitecalf says those who live off the land will feel this the most.

“A lot of our people here continue to live a very traditional lifestyle,” she says. “So when we have something in the environment that hinders our vegetation, our animals, our waters — it hinders, basically, our drug stores that are in our backyard, our grocery stores.”

Whitecalf says Husky Energy contacted her within an hour of the discovery of the spill — but she has yet to hear from the province or the federal government.

Whitecalf says they have yet to hear from Husky what the true impact of the spill will be.

Chief Kenny Moccasin of the Saulteaux First Nation says some members of his band are talking about staging a protest against Husky Energy over the impact of the spill.

“A lot of my people rely on the hunting along the river, the berry picking, the picking of sweetgrass and traditional herb medicines,” he says.

Moccasin says Husky Energy officials waited four days before contacting him — something he is “not too impressed” with given that Husky infrastructure is situated roughly 50 kilometres from his First Nation.