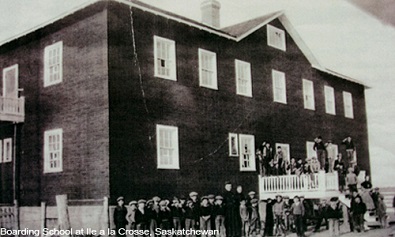 Next month, the Minister of Indigenous Affairs is expected to honour a commitment to visit Ile-a-la-Crosse.

This visit has been in the works since February when Bennett visited La Loche. She spoke with Metis people from the area about how Ile-a-la-Crosse’s claim under the residential school settlement was denied, Chartier said.

The school was run by the Roman Catholic Church starting in the 1860s, and the fact that Canada’s government didn’t fund the school absolved the feds of responsibility during settlements. This, despite the fact that students in Ile-a-la-Crosse suffered the same type of abuse and cultural mistreatment as other students who did receive compensation, said the chairperson of the Ile-a-la-Crosse Boarding School committee, Jim Durocher.

He uses Beauval Indian Residential School as an example.

“A lot of them didn’t know, for example, how to be a mother or how to be a father at home, how to raise children, and that sort of thing because all of stuff was taken away from them when they were attending the schools,” Durocher said.

Talks about compensation for abuse suffered at the school has been a long time coming. Former Prime Minister Stephen Harper was heard on MBC’s airwaves on the 2006 campaign trail with a promise he would compensate those students if elected. Later, Indian Affairs Minister Jim Prentice backtracked on that.

After spending time with Bennett in New York City for a United Nations event in May, Chartier said she is taking a different approach to unresolved boarding school or residential school cases.

“She said that the current agreement is a narrow legal one and that it shouldn’t prevent them from moving forward and resolving all issues with all residential schools that Aboriginal kids attended, so she is prepared to engage in a discussion with us. The end result, I don’t know,” he said.

Durocher urges survivors to put the brakes on signing up with any lawyers who have been approaching them in this case.

The federal government wants “to deal with things at the table, you know, instead of litigation they want to negotiate. And we think that’s the way it should be,” he said.

It’s important for former students to be organized when Bennett arrives, Durocher said.

“We want to be able to have a little strategy meeting because the minister will only have a limited amount of time here and we want to give as many people as possible talk to her, to give her their story,” he said.

Chartier agrees, saying former students need to put pressure on the minister to resolve this.

“Now is a great opportunity for us to move forward. We need to convince the minister when she comes to Ile-a-la-Crosse that they need to do the right thing. So the more former students that can make it to the meeting at Ile-a-la-Crosse the better so we can impress upon the minister the need to, in fact, deal with us for once and for all.”

Durocher said they can’t provide funding for survivors to attend, but will have a lunch in Ile-a-la-Crosse for them.

He said the lunch starts around noon on July 15 and the afternoon will include speeches from local dignitaries like Mayor Duane Favel, MLA Buckley Belanger, and MP Georgina Jolibois.