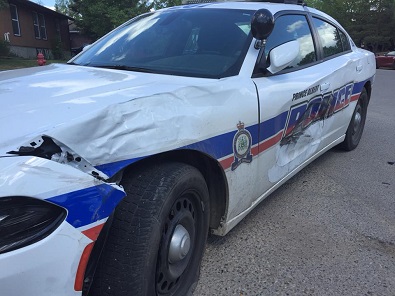 The Prince Albert cruiser pictured after a truck collided with it while trying to evade officers. Photo courtesy Prince Albert Police Service.

Somehow, no one got hurt in a hot pursuit in Prince Albert on Thursday that knocked a police cruiser out of commission.

Around 12:15 p.m., Prince Albert Police had been attempting to pull over a truck that Big River RCMP had reported as stolen two hours earlier. They spotted the truck in the city’s East Hill neighbourhood, in the 2900-block of Sherman Drive.

The suspects in that theft had also allegedly committed a violent home invasion in the Big River area, according to Prince Albert Police.

But the suspect vehicle not only failed to stop, it attempted to evade officers by pulling into an apartment courtyard. When that didn’t work, the truck then smashed into the cop car before hitting a residence.

Police and a canine officer then started a foot chase before arresting two 19-year-old men.

The full list of charges they’re facing, have yet to be released.