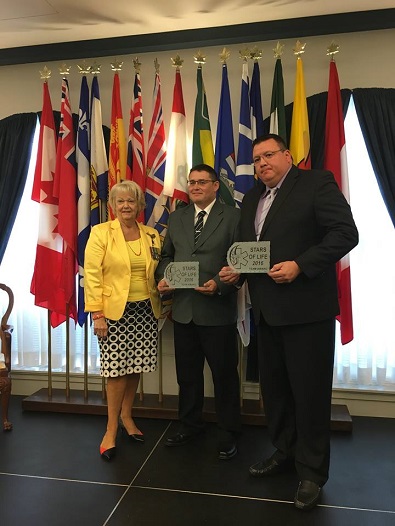 The first two paramedics on the scene after a shooter opened fire in La Loche high school’s Dene building, were part of a special ceremony in Regina this week.

In the aftermath of the January 22 shootings that killed four La Loche residents, politicians spoke of heroic acts from that day but remained mum on the details.

Prime Minister Justin Trudeau said he spoke with first responders to the crisis and that in time, Canadians will hear about those who kept one of the largest mass shootings in Canadian history from being even more tragic.

On Monday, for the first time, the public learned the names of some of those responders.

Ile-a-la-Crosse-based paramedics Darryl Morin and Kalvin Jones were honoured for their response when Lieutenant Governor Vaughn Schofield gave them the Star of Life Team Award at a ceremony in Regina.

They were the first two paramedics at the La Loche high school’s Dene building that afternoon, and the details are grim. Two educators were shot dead in the school and seven more were seriously injured. Two more teen brothers were killed before the shooter arrived at the school.

More details on the acts of bravery by both Morin and Jones are provided in the awards bio, which reads that “under RCMP protection and with an active shooter still in the building, Kalvin and Darryl provided outstanding medical care to get the victims safely to the health center.”

The bio states that “ehen faced with such an incredible situation these two professionals did more than what was expected of them. Their outstanding commitment, caring and professional response have led them to be recognized for a Star of Life Team Award.”

Global News spoke with the two men, reporting that both have struggled with post-traumatic stress disorder in the months since.

The Keewatin Yatthe Regional Health Authority provided further details on how Morin and Jones have felt in the months since the crisis.

In recognition of the combined efforts of those responding to the shooting, Morin dedicated his award to La Loche Fire, the RCMP, doctors, nurses, hospital staff, community members, and STARS Air Ambulance.

“It’s not only for me. It’s for all those first responders who responded on that sad, tragic day in La Loche.”

Both Morin and Jones say they haven’t put their uniforms on since January 22, and while Morin is sure he’ll return to work, he isn’t sure when.

“This is what I love to do — helping people. I’ve been working in EMS for 16 years, since high school. I’m still doing it and I’m still going strong.”

Jones lives in Ile-a-la-Crosse, and according to the Keewatin Yatthe Regional Health Authority, has been nervous about returning to La Loche since the incident.

However, the recognition has given him the motivation to return to studies to become a primary care paramedic.

Eighteen other paramedics from across Saskatchewan were honoured in Monday’s ceremony.