LLRIB chief hands of binder of priorities to Prime Minister 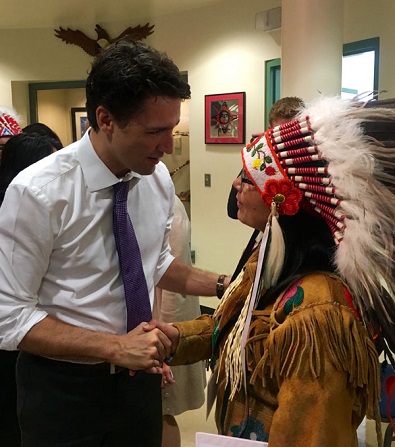 The head of one of Saskatchewan’s largest Indian bands didn’t waste any time when the Prime Minister was in Saskatoon on Wednesday.

Lac La Ronge Chief Tammy Cook-Searson says she came to Oskayak school in Saskatoon armed with a full binder to give to Justin Trudeau, which laid out her band’s federal priorities.

Before the grand entry, Cook-Searson had a quick chat with the prime minister, who had previously been briefed on Lac La Ronge Indian Band’s (LLRIB) by the Minister of Public Safety, Ralph Goodale.

“He (Trudeau) said he’d be very interested in the wellness healing recovery centre that we’re working on in La Ronge and he wanted to learn more,” she said.

“He wanted me to work with Minister Carolyn Bennett and also one of his policy analysts.”

Cook-Searson said he next steps are to have a meeting with Bennett as well as the Minister of Health, Jane Philpott to explain the Mental Health Strategy’s findings on the feasibility of the recovery centre.

On Wednesday, Cook-Searson had originally been told they’ll have a half-hour meeting, but Trudeau’s schedule was very heavy.

Regardless of how long she was able to talk to the Prime Minister, Cook-Searson said she and her office staff did plenty of preparation to make sure she could get right to point. She points out that First Nations advocate bodies, from Prince Albert Grand Council to the Assembly of First Nations, have also been pushing LLRIB’s needs on a federal level.

So after his trip to Saskatoon, Trudeau was headed back to Ottawa with a binder full of information on three different proposals: the first, the $17 million proposed healing centre; the second, a proposal is for the creation of serviced lots for housing subdivisions; the third, a request for federal funding to reflect that LLRIB is more than just one community.

On the third issue, Cook-Searson said she wants the government to recognize her band as a multi-community first nation and fund it accordingly.

Cook-Searson is optimistic that LLRIB won’t go unheard, but says it will take time for the Liberal government to act on important First nations issues.