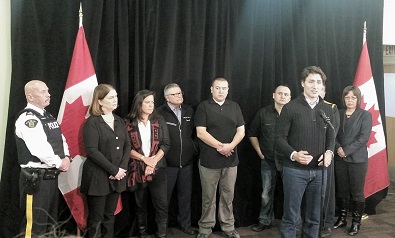 All of La Loche was invited into the room while Prime Minister Justin Trudeau spoke on Friday.

Trudeau landed in the area around noon to meet with the community.

Trudeau visited the remote village one week after a shooter opened fire at a home and a school, killing four people and wounding seven.

The prime minister met with the injured, with family members of the dead and with community leaders.

Trudeau also held a town hall meeting with about 700 residents.

He recognized leaders and families who have lost their loved ones to last week’s shootings.

He said that in a time of darkness, the eye begins to see, and everyone must stand together to address deeper issues highlighted by the shooting.

Trudeau says he has assured a Saskatchewan community scarred by a mass shooting that his government will offer support for years to come.

He did not commit to a request from La Loche Mayor Kevin Janvier that funding be provided for infrastructure, health and education for the next 10 years.

Trudeau said his visit to La Loche today was primarily to listen to local leaders and residents.

The prime minister said past governments of all stripes have not done enough for Canada’s Indigenous people.

The remote northern village has spent days making sure everything was in place for today’s visit. Some locals are admitting they haven’t had time to grieve properly.

A few blocks away from the Ducharme elementary school where Trudeau has been this afternoon, a wake is being held for Marie Janvier.

The 21-year-old teacher’s assistant is one of four who were killed in last Friday’s shootings.

Many were stepping to Janvier’s casket at the front of the community centre to say their final goodbyes.

Beautiful tributes — pictures and massive flower displays — were being carried to the front.

(with files from The Canadian Press)