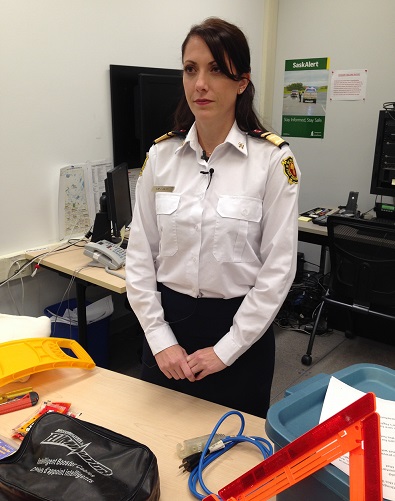 With the Christmas season upon us, there’s an increased danger of traffic accidents, fires and other tragedies.

On Wednesday morning, the provincial emergency planning department outlined what it considers to be some of the biggest risks during the holidays.

Getting stranded on an isolated roadway without a survival kit and household fires are the two biggest threats to safety, said deputy commissioner of emergency planning and fire safety, Meika Cleary.

She says people are using lots of lights, extension cords, fireplaces, and there is often a lot of celebration and partying. Frayed wires, careless smoking and cooking fires all quickly turn into raging infernos.

A dry Christmas tree is quick and ready fuel for any fire.

“It’s good to have your tree at least three feet away from any heat source,” Cleary said. “There are always candles and a lot of people around, and cooking and that sort of thing, but there are a lot of things you can do for fire safety around Christmas.”

These tips are especially relevant to isolated First Nations. An internal federal government report released this week indicates the likelihood of a fire in a First Nation home is 2.5 times the Canadian average, while the chances of dying in a fire are more than 10 times the national average.

Cleary says early warning is your best bet for getting out alive.

In February of this year two toddlers died in a house fire on the Makwa Sahgaiehcan First Nation, north-east of Lloydminster. The home had a smoke detector but it was impossible to tell if it was in working order because of the total destruction by the fire.

Since then a number of tribal councils – including Meadow Lake, Prince Albert, and Saskatoon – have conducted fire audits of their member First Nations.

Canada’s new indigenous affairs minister, Carolyn Bennett is also weighing in on the issue. She said the current situation – with about half of all Canada’s First Nations without adequate fire protection – is unacceptable.