FSIN Chief looks ahead to 2016 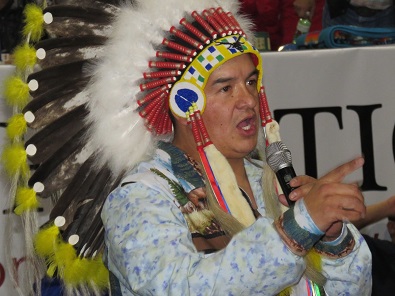 Bobby Cameron took over as Chief of the Federation of Saskatchewan Indian Nations only a few months ago, but already knows what he wants to accomplish in the New Year.

The Chief of the FSIN says housing is one of the top priorities in 2016.

“The treaty right to shelter, obviously here in Saskatchewan we did our research and we identified we need 13,000 homes built in Saskatchewan,” says Cameron. “And we base it on four people per home with each person having their own bedroom and bed.”

Education is another treaty right high on the list of priorities for Cameron.

He says one of the challenges this coming year is to find a funding formula for education that adds the new Liberal government promised $2.6 Billion over four years during the election.

Cameron says the FSIN’s funding formula will be based on language and culture.

“So that’s the number, the initial number we’re throwing out there, its $20,000 per student per year,” he says. “But we’re also waiting for the formulas from the   northern and remote communities.”

Cameron says the education costs will probably be higher in the north because of the higher cost of living.