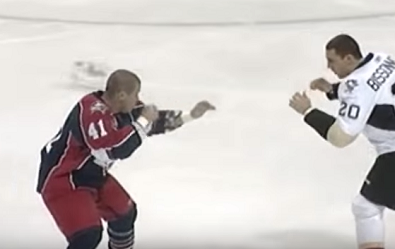 A YouTube screenshot of Jon Mirasty during one of his now-infamous brawls.

A man well-known for his hockey scraps has traded in his skates for something new.

As a former enforcer on pro teams with the Russian hockey league (KHL) and American Hockey League, owning a business has gotten Mirasty out of his comfort zone.

“I’ve been a hockey player the last 15 years so this is a very new venture for me, and it’s big learning curve but at the same time it’s exciting and I’m going to get better every day,” he said.

With the nickname Jon “Nasty” Mirasty, for his feisty fighting methods as a hockey player, Mirasty admits it’s not just the Tims brand that has some name recognition in the area.

“It’s funny, when I’m making a presence on the floor at all times and a lot of people come up and ask me questions about my career and stuff so I’m sure that influences it a bit,” he said.

As for why Mirasty and his wife decided to settle down and hang up his skates, he said family played a big role.

“With the role that I did, I was more of a physical player,” he said. “My career was great. Towards the end of my career I knew that I needed something after hockey. So… a few years prior to me retiring from hockey I started to prepare for this and it took a few years in the work to get this done and accomplished but on December 11th it finally came to life.”

If the Christmas rush is any indicator, the new Tim Hortons shouldn’t have any trouble keeping business steady as it settles into the community.

Mirasty said so far they’ve hired more than 55 people, but that they’ll be whittling down the staff as they find out who’s the right fit for the job.