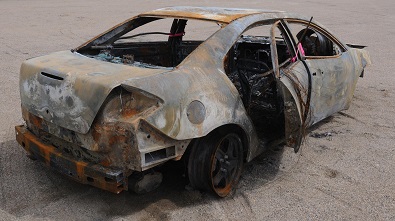 A missing person case near Prince Albert that was suspicious off the get-go, has been officially declared a homicide by RCMP’s Major Crime Unit North and the Prince Albert Police.

Troy Cecil Napope was reported missing on June 6. He’d last being seen around May 28 leaving a party, driving a four-door grey 2004 Pontiac Grand Prix. That same day, Prince Albert RCMP responded to a car found burning in a treed area just north of Prince Albert, off Whitfield Road. After further investigation, they determined this was the same car Napope had been driving.

The RCMP is now saying they believe Napope was the victim of foul play. Napope’s remains have yet to be located. Police say searches of the area did not provide any information as to where Napope was or what happened.

“Over the weekend, the RCMP Major Crimes Unit North received a number of tips regarding Napope, and investigators are currently following up on these tips,” said RCMP spokeswoman Eilidh Thain.

Police are asking anyone in and around the area of Whitfield Road on May 28, 2015, who saw anything unusual to contact the police. Police are also looking to talk with anyone who had contact with Troy Napope or anyone who saw his vehicle, a grey 4 door, 2004 Pontiac Grand Prix, on that same day.